Mindfuck demo was created for Forever XIII demoparty held from 16th to 18th March 2012 in Horná Súča near Trenčín city. Basically I wrote this demo because I did not want to come to party empty-handed without any new production.

What I did not expect was that I won the first place in the category of Atari Demo, even though the presentation projector somehow  “swallowed” colors and the effect was not actually  seen. Check it out:

Anyway, I only noticed when processing video that I actually did not sent latest version to XI (who covers Atari section of demoparty), which contains additional white frame with black borders (this version does not run on NTSC machines). 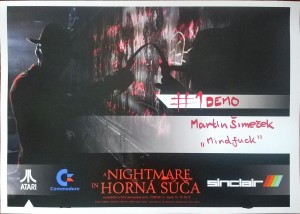 This should be presented on compo...

This is actually version from compo (accidentaly)

use MADS to compile

Ridiculous Reality is new game I made for Abbuc Software Contest 2012. It is arcade puzzle platform game where you […]