When I finished Laser Blaster, it wasn’t tested on real ATARI (I created it completely using emulator on PC). I’ve received some nice e-mails after release at Atariada, but also a bug report that my game crashes when switching between title screen and game. Not long ago I’ve connected my ATARI to PC, tested game and fixed code. I’ve changed in-game logo at same time, because it looks weird on real ATARI. 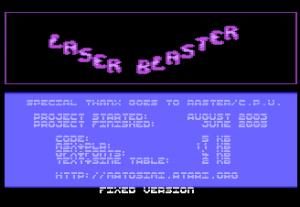 Probably tha last version of this emulator. It works fine, it has some new features used by console. It supports […]