I managed to finish another game recently. This time it is Quarrion, which was previewed on last new years disc 2015. I started coding this game year ago. Final gameplay was done for some time, but I needed to fix some bugs add graphics, music and wrap it all up. Finishing the project is always hard, because it sucks so much time when you focus on small details and try to make them look the best possible way.

Game is submitted to Retrokomp Load Error party GameDev compo which will take place in Gdansk eight days from now. 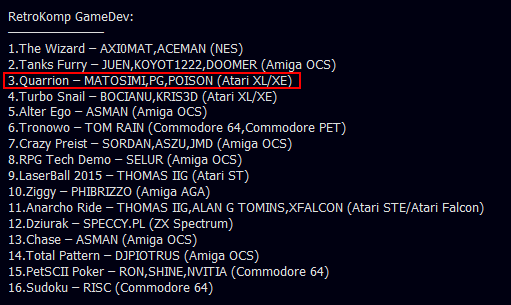 Some more info about the game…
It is logical game which might look similar to game 2048, but game rules are different. There are two colors of tiles in playfield. Your task is to put at least 3 same colored tiles in line (or column) to make them disappear. Each move shifts all tiles in playfield to selected direction same as it is in 2048. New tiles appear after every move, you can see what colors those tiles will be in status bar. As game advances there are new tiles introduced, specifically tiles with “4” and “5” figures which can be turned into bombs. Also number of new tiles after each move will increase after certain score is reached.
Goal of the game is to last as long as possible until there is not enough free place to put new tiles to.

Game requires classic 64kB Atari XL/XE computer, music is stereo… so stereo expansion is highly recommended.
Also same as in case of most of my games, Quarrion is NTSC compatible.

Update 21.10.2015: Xuel sent me SDCMC player mono patch, so I updated music player of Quarrion, it removed crackling sounds when you run game on Atari without stereo pokey.

As I wrote couple posts before, I’m moving all my Atari projects to sourceforge.net. There are already all of them […]