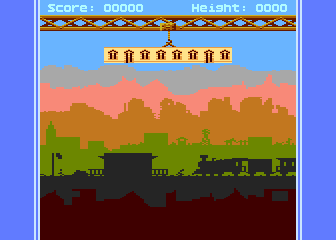 It’s been a while since my last post. I have an announcement to make: Skyscraper is almost finished and I plan to submit it to upcoming Abbuc SW Contest 2016.

There were two Work-In-Progress videos released near the end of last year. I granted myself quite big pause in the development. Then spent couple hours adding title screen during spring (as far as I remember) and last two days were quite productive since I sat behind my PC and finished gameplay.

I needed some time to think about additions that could make gameplay more challenging and not totally repetitive. So there is difficulty increasing and couple of secret modes that might get you extra score.

Currently the only functional thingie that is missing is SFX.

Game is PAL/NTSC compatible and uses 4 channel stereo, so totally playable w/o any issues on stock 64kB mono machine that does not include any extension/expansion (like 800XL I own).

I will not publish any new picture or video prior to Abbuc SW Compo deadline… so here are just those two WIP vids from 2015: 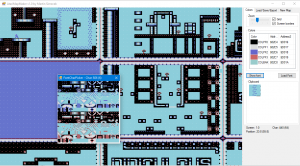 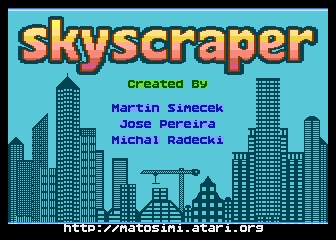