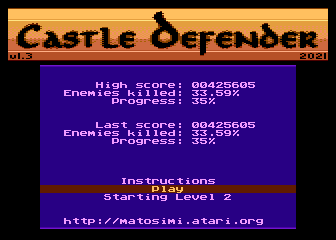 I have performed some additional changes to Castle Defender.

I believe this version is final.

Most important change in this version is the major switch of control scheme. I have added neighboring matrix for towers, so from version 1.3 it is possible to nicely switch between towers according to following graphs:

Other quite handy feature is that if you hold fire for about 0.5sec the game runs as fast as possible (same as when you hold Spacebar)… so it is now quite conveniently handling all controls using joystick without need of keyboard.

Oh, I almost forgot… very important new feature from player perspective: it is now possible to unlock levels, so once you reached level 2 and died, you can start again from level 2 without need to play through 1st level again.

I am happy to say that my Fallen Kindom received silver medal at ABBUC software contest 2021. Thanks to all […]