I have been working on game for Abbuc SW contest 2013 for a quite while, but due to my day job (yes, I do not make living out of Atari development) I was unable to finish such technically complex game on time. Development has been also paused for 2 weeks because I left for vacation and came back just few days before Abbuc SW Contest deadline. So I decided to challenge myself…

I started working on new game on 31.8.2013 sometime around 7:00 AM. I usually suffer from ADD (Abbuc Deadline Day) and this year was not an exception.

I already had idea of game, but I had no assets (no music, no gfx, no fonts, nothing)… just the idea.  From this point I needed 16 hours (till Abbuc deadline) to make game from scratch…

…and Xirius defect is the result of my work: 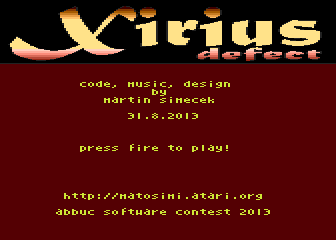 As you can see, it is not very special unique game, but it is quite a win for me.

Rules of game are quite similar to “Light Up!” that I coded and sent to Abbuc SW Contest in 2006. This game is however really coded from scratch. No parts of existing code were used, except of RMT music replay routine. Game was entirely written and designed on 31.8.2013.

It sounds complicated, but it is pretty easy.

Music was downloaded from modarchive in mod format, imported to RMT, instruments were assigned and I also have to make some other minor modifications to it.

Firstly I was working on game playfield, so I was switching between coding and element design. After I was able to display current level, I started working on controls. Emitting elements are static gfx, but after you click on one of them, they are switched to PMG. This was functional till noon. Around 1PM game slowly started to be playable. I was working on controls and response to click (fire) for about 2 hours and next step was title logo. I prepared it in gfx editor, exported to 4-color PNG, loaded into g2f and exported fonts and screen data. Near 3PM was my logo implemented in code. I wrote logo DLIs by myslef, so I did not used exported ones. Adding logo to game shifted whole gameplay area several lines below so I had to adapt these changes. I was also getting some terrible crashes due to this, but I fixed them eventually.

Then I was working on gameplay and controls for several hours.

Music was added around 8PM and after that I started adding levels. I was using playfield of size 7×6 so far, but I found that it was not enough so I had to resize it to 11×6. This also required many changes in code and focus to make everything working again.

Element animations were added around 11PM. Last thing that I was working on before game was sent to Sascha Kriegel (Abbuc SW Contest representative) was final screen together with title and help screens.

It was quite a marathon, I hope you like this game even if it is not that cool as my other previous productions.

Some new features have been added to Atari Fontmaker, so if you use this piece of sotware, I strongly recommend […]